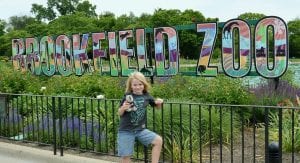 We’ve been thinking that Russ Noyes Roofing Inc needed a mascot. As many of you know there is a special place in our hearts for animals of all varieties but when we created our new logo a few years ago, we knew it had to be a rhino so we looked for just the right one. Our friend Carson and his family went to the Brookfield Zoo where they met an eastern black rhinoceros named Nakili. They took Rufus, our new mascot, along and had some fun.

Black Rhinos are the giants of the Savannah weighing in at between 2,200 and 3,200 pounds which in our world is about 10 squares of shingles! They are around five feet tall and can run up to 35 mph. Although they don’t make a lot of sounds, they do snort when angry or to sound an alarm. Sometimes they growl when fighting or squeak for different emotions. They communicate most often with their ears and tails.

Carson’s trip from Longwood to the zoo was almost 1200 miles! Rufus sometimes helped navigate and other times kept Carson company in the back. They traveled through Georgia, Tennessee, Kentucky, Indiana to Illinois.  Carson reported seeing cows, horses, birds, deer, sheep, and some sort of possum or mole during their drive but no rhinos. In fact there are no rhinos in the wild in the United States. They are native only to the southern hemisphere in Africa. Their only natural predator are humans who have hunted them nearly to extinction because of their horn. 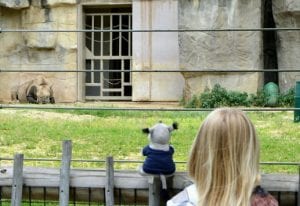 The Brookfield Zoo is home to over 2300 animals from 250 different species. Of course Carson and Rufus visited many of the animals in the park he was most excited to see a Black Rhino in person. Before his trip Mr. Russ (aka Russ Noyes) explained why the rhinoceros is part of Russ Noyes Inc’s logo. He explained that every roof they install is made to be as tough as a rhino’s skin. A rhino’s skin is very thick and strong and water resistant. Much like a rhino’s skin, every roof installed by Russ Noyes Roofing is done so in layers which insulate and protect the home, just like a rhino’s skin protects its body and is why we say, “This stuff is tuff!”.

Everyone at Russ Noyes Roofing thanks Carson and his family for helping us learn more about black rhinos. We hope that when it comes time for a new roof you’ll say, “I’d like Russ Noyes Roofing to roof us!” and if you do, you might just get your very own Rufus. If you’d like to adopt a rhino and help save the species, click here.